Find this article at:
go.ncsu.edu/readext?474949
— Written By NC State Extension

We’ve had a number of inquiries about wasps hovering over lawns and other turf areas. Bluewinged wasps, Scolia dubia, are black-colored insects with metallic blue highlights on the wings and thorax. The abdomen has two yellow spots near the middle of the abdomen and the tip is a red-brown color. Bluewinged wasps are in the family of scoliid wasps that are all dark, relatively large, robust, slightly hairy insects with contrasting yellow spots or other markings. Scoliid wasps are usually considered beneficial insects because they help control green June beetle and other beetle grubs. They are present in North Carolina from June to October, but they are most abundant during August (weather can push the early or later).

The wasps are often seen hovering a few inches above lawns, flying in loops and figure eight patterns. The female wasp digs through the soil in search of grubs, burrowing her own tunnels or following those made by the grubs. Upon locating a grub, she stings and paralyzes it. After laying her egg, she continues searching for other grubs and continues the cycle of stinging and burying the prey and laying an egg. When the wasp larva hatches from the egg, it consumes the beetle grub alive. They complete their development in the soil and this next generation emerges as adults next fall.

Sometimes scoliid wasps are quite abundant and conspicuous as they swarm during their mating dances. Later, females spend more time digging for grubs and the swarms are not as noticeable. These wasps forage for nectar and sometimes sleep on plants. As the nights cool, they burrow under the soil at night. Scoliids are solitary wasps rather than social wasps like the yellow jackets, hornets, etc.) and so there are no large colonies supported by workers. Scoliids do not have a nest-guarding instinct and these wasps rarely, if ever, sting people.

No control measures are suggested or really needed. Let them continue to do you a favor by reducing grub populations. 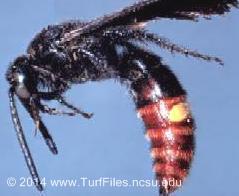 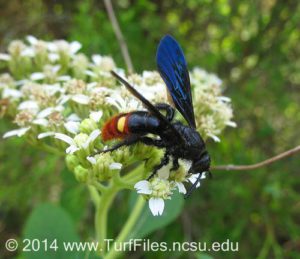