Find this article at:
go.ncsu.edu/readext?475063
— Written By Rick Brandenburg 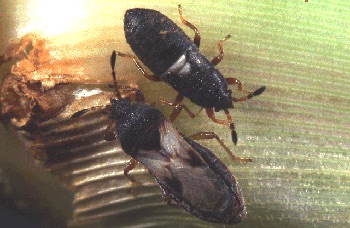 We are getting our first reports of chinch bug activity in St. Augustinegrass in Wilmington, NC and, similar to other turf pests (fall armyworms) this year, the timing is very early. Chinch bugs thrive in hot, dry conditions and populations usually become an issue much later in the summer. Early damage starts as small irregularly shaped discolored areas (yellow or tan) that eventually die. Problems often start in areas that receive the most sun and are very dry.

Southern chinch bugs are easy to control if detected early. Check for chinch bugs by parting the grass at the interface between healthy and damaged areas and inspect the lower stems and thatch. Another method is flotation. Cut off both ends of a large coffee can or similar container and remove one rim with tin snips to produce a sharp edge. Push the edge down through the thatch in areas to be checked. Flood the can with water to the brim. If chinch bugs are present, they will float to the surface within a few minutes. Infestations of 20-25 nymphs per ft2 (4-5 per 6-inch diameter can) will cause enough damage to warrant control.

Click to read more about chinch bugs on TurfFiles