— Written By Fred Yelverton (3 months ago)

Watching the World Series? Game 3 moves the series from Houston to Washington DC, home of the Washington Nationals. Notice the beautiful field? It is courtesy of John Turnour, a 2001 turfgrass graduate of the Department of Crop and Soil Sciences at NC State University. John will be on the largest of sports stages as the Nationals host the World Series for the first time.

So how did John get to one of the sports largest and most high profile venues? After graduating from NC State University in 2001, in chronological order, John worked with the Durham Bulls, Carter-Finley Stadium, Baltimore Orioles, San Diego Padres, and then in 2010, was named head groundskeeper for the Washington Nationals. John manages a total staff of 38 people to take care of the Kentucky bluegrass + perennial ryegrass field – four are full-time employees, four interns, and 30 game day staff. On game day, John and his staff work 15 hours/day. What is his biggest challenge/concern? As with any sports field, it is the consistency and safety of the playing surface. As John mentioned to me this morning “our goal is to provide the highest quality and most consistent playing surface for both teams.”

Needless to say, the NC State University turf faculty are proud of John’s accomplishments. So while most viewers will know Trea Turner, the Nationals shortstop, is a former Wolfpack player and Ryan Zimmerman, the Nationals first baseman is from Washington, NC, the Wolfpack family can be as proud by knowing John Turnour is the person behind the scenes that has a role as important as anyone’s. Tune in, and you will see turfgrass perfection, courtesy of John Turnour. 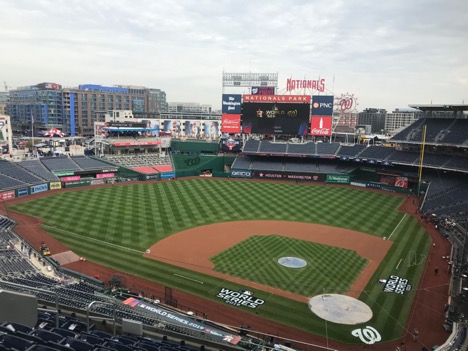 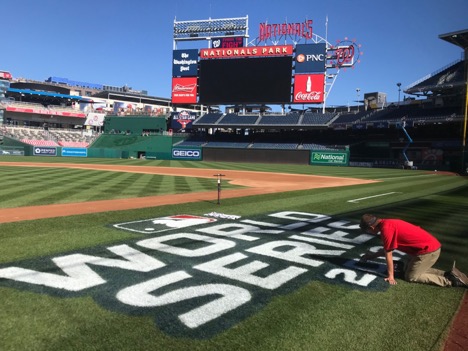