Find this article at:
go.ncsu.edu/readext?759814
— Written By Grady Miller

Fraise mowing (fraze/fraise mowing) is a cultural practice that was devised in the Netherlands during the mid-1990s and is similar to vertical mowing. While vertical mowing partially impacts the surface (≤30%), fraise mowing’s impact is absolute- encompassing 100% of the surface with potentially reaching up to 2-inch depths in a single pass. This makes fraise mowing an appealing thatch management tool especially with bermudagrasses. Thatch removal is the primary benefit of fraise mowing, but other demonstrated benefits of fraise mowing include Poa annua control an overseeding removal (McCauley et al., 2019; Hansen and Christians, 2015; Baker et al., 2005). These benefits come at price, though. Fraise mowing disrupts turf quality until bermudagrass regenerates from remnant rhizomes and stolons. This duration of this disruption depends on fraise mowing depth, and recovery times can range from 3 to ≥6 weeks for 0.25 inch and 1-inch depths, respectively (Shelton et al., 2016). Despite nearly 25 years of use, there has been limited research on fraise mowing. To satisfy this void, we conducted multiple field studies over the past four years that monitored fraise mowing’s impact on soil physical properties, its ability to remove shallow compaction, and practices to expedite bermudagrass’ recovery after fraise mowing.

A number of independent field studies have been conducted since 2016 to evaluate a number of soil and plant responses to fraise mowing. One field study was conducted from mid-June through mid-August each year in 2016-2019 that assessed the effects of three fraise mowing depths on soil physical properties. Thatch depth, infiltration rate, soil surface hardness, soil shear strength, and soil water retention were monitored in two soils (loam and sand) at 14-d intervals starting immediately after fraise mowing. Following some initial tests, a hollow-tine aerification treatment was included with the three fraise mowing depths (0.25, 0.5, 1.0 inches) in 2017 and 2018 with the objective of evaluating the effects of both cultural practices on soil physical properties and bermudagrass recovery. Compaction from routine traffic in turfgrass systems is usually confined to the surface 3-inches of the soil profile. These depths overlap with the functional depths of fraise mowers. Two field studies were initiated to evaluate fraise mowing’s potential for relieving shallow soil compaction. Study I was conducted on four athletic fields in Chapel Hill, NC. Simulated traffic was applied with a traffic simulator at the equivalent of 0, 20, 40, or 60 American football games before fraise mowing at 0.8-inch depth. Two field studies were conducted in the summers of 2017 and 2018 to test sand topdressing and nitrogen fertility’s ability to hasten bermudagrass’ recovery. Both studies were fraise mowed in mid-June to 0.25 inches depth. Starting 7 days after fraise mowing (DAF), fertility plots received water soluble nitrogen (WSN) at rate of 0.25, 0.5, 0.75, or 1.0 lb. 1,000 ft-2 per week for four consecutive weeks from granular ammonium sulfate or one application water insoluble nitrogen (WIN) at 2.0 lbs. 1,000 ft-2 from granular polymer-coated urea. In the topdressing study, all plots received one independent sand application at 0, 7, or 14 days after fraise mowing to a depth of 0 (control), 0.13 (shallow), 0.25 (medium), or 0.5 inches (heavy).

Fraise mowing is a very disruptive cultural practice, and bermudagrass requires ≥3 weeks to recover from it. Results from our studies provide turf managers with concrete steps to shorten this downtime with nitrogen fertilization while informing them of fraise mowing’s effects on soil physical properties. The successful pairing of aerification with fraise mowing was also demonstrated, as well as fraise mowing’s potential to remove shallow soil compaction. These results will remove some of the apprehension of this practice and may lead to its expanded use. 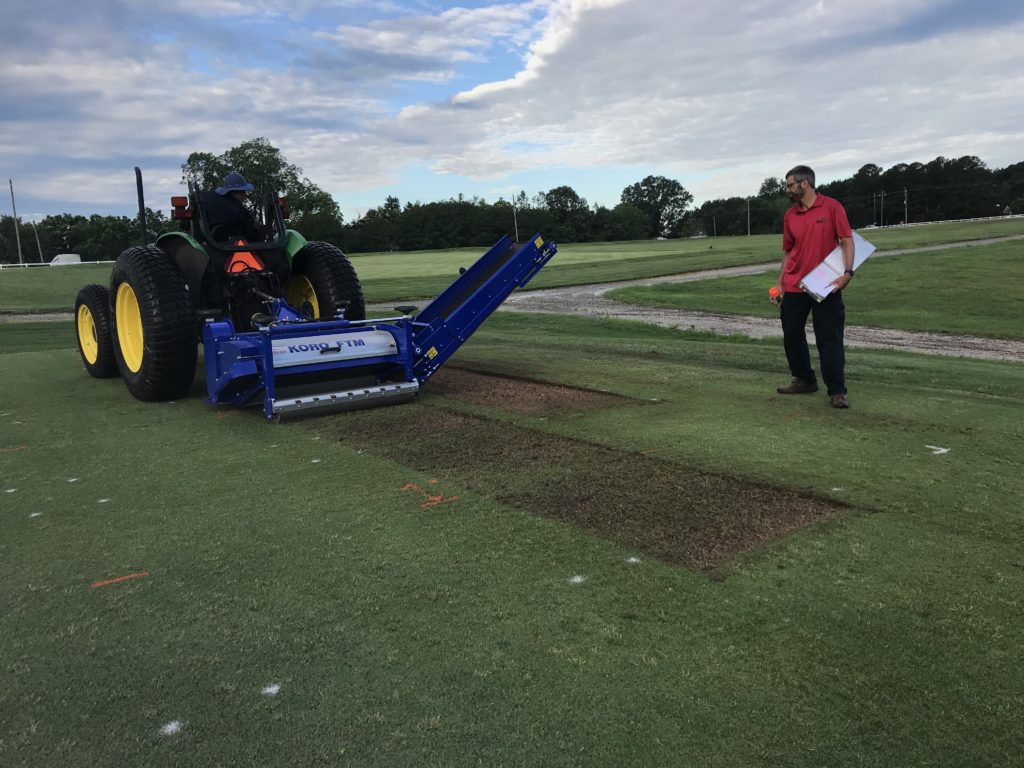 Hansen, K., and N. Christians. 2015. Establishing Kentucky bluegrass after fraze mowing: time to recovery after fraze mowing can be affected by seeding rates and the use of turf covers. Golf Course Manage. 83(7):88-93.