Find this article at:
go.ncsu.edu/readext?759695
— Written By Grady Miller

Naturalized areas have become an important component of golf courses, not only because of the value they provide for aesthetics, but also as a refuge for wildlife (Mays and Vasey 1999; Terman 1997). This latter benefit is greatly appreciated by many golfers. Therefore, finding ways to maintain those naturalized areas without affecting the established vegetation can greatly simplified golf course management for superintendents.

Currently, ground-based pesticide sprayers for the turfgrass industry have a high level of precision and are ideal for treating fairways, greens, and roughs. However, they are not suitable for applications in naturalized areas, and they tend to leave visible track marks that can last almost the entire growing season. Also, depending on the height of the vegetation in the naturalized area, ground-based sprayers can cause lodging of native species favoring the establishment of weeds and invasive species.

UAV technologies are becoming more affordable quickly. Currently, besides the wide range of UAVs for image collection, there are several UAV sprayers available in the marketplace for small scale broadcast applications and for site-specific applications. These UAV sprayers make it possible to spray agrichemicals in areas that are difficult to access with ground-based sprayers either due to irregular topography or presence of physical barriers such as trees, buildings, and water bodies (Hunter et al. 2020). Therefore, UAV sprayers are an ideal tool to conduct herbicide applications to prevent the establishment and grow of weeds in naturalized areas.

The NC State University Weed Science Program have been optimizing the use of UAV sprayers for weed control in turfgrass settings, and it is currently adapting this technology for other uses including difficult to access locations, such as naturalized areas (Hunter et al. 2019). The objectives of this research were to 1) determine the efficacy of selected herbicides when applied by Unmanned Aerial Vehicles (UAVs) in naturalized areas in golf courses and 2) determine the safety and aesthetics of UAV applications for weed control in naturalized areas in comparison with conventional ground-based applications 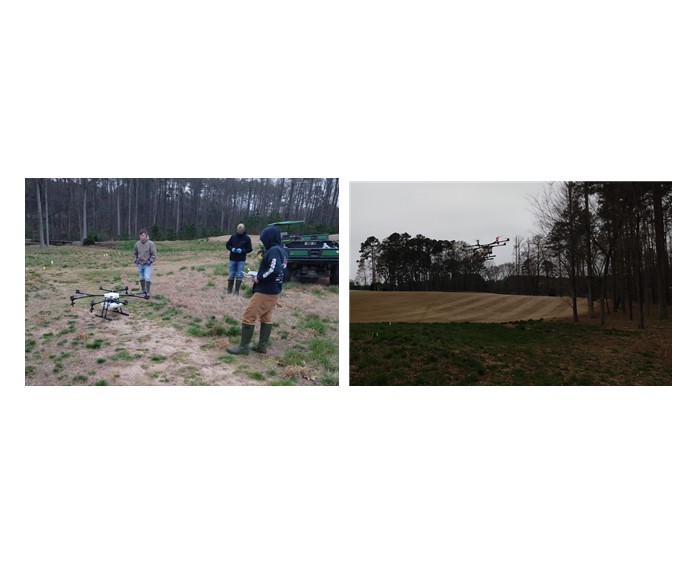 Figure 1. Preparation (left) and application (right) of preemergence herbicides with a UAV-sprayer in a naturalized area in a golf course in Raleigh, NC.

A large scale experiment was initiated during the winter of 2020 at Lonnie Pool Golf course in Raleigh, NC. Naturalized areas were selected in the fall considering density and uniformity of desired species, weed pressure, and slope. Aerial image analysis was used to identify the best locations within the golf course for the experimental plots. In the Spring of 2020, herbicide treatments were made comparing a conventional ground-based spray boom and UAV-sprayer (Figure 1). All herbicide treatments were applied with a ground-based sprayer and with a UAV sprayer. Treatments included a preemergence (PRE) herbicide Dithiopyr and a postemergence (POST) herbicide and were as follow: 1) PRE in February (PRE), 2) POST in May (POST), 3) PRE and POST, and 4) nontreated control.

A second experiment was established in the same area to evaluate how flying speed and application volume affected weed control efficacy and safety in naturalized areas. In this case, the UAV sprayer applied both a PRE and a POST herbicide at 2, 7, 11, and 16 mph, which are the preset application speeds for the UAV sprayer and are equivalent to 16, 5, 3, and 2 gpa. A nontreated control will be included for comparison.

After application evaluations were conducted to determine weed control efficacy based on visual observations and UAV collected imagery determining coverage and uniformity of control, quality and uniformity of desirable species, and energy and time consumption for each application system will be quantified.

Herbicide applications were initiated and several challenges were identified for the UAV sprayer. Not all naturalized areas were eligible for UAV applications because they were too close to a highway, which represents a zone of high risk. Additionally, wind conditions limited the day of application more for the UAV than for the ground-based sprayer, due to the higher risk of drift for the former.

The UAV sprayer made it possible to conduct herbicide applications in areas with irregular topography and steep slopes in an easier and faster way than the ground-based sprayer (Bretthauer 2015). After the first set of evaluations, there were no visible differences in weed control and the quality and aesthetics of the naturalized areas between the two application systems.