Find this article at:
go.ncsu.edu/readext?759706
— Written By Grady Miller

Cost effective pest management requires timely information on pest status and data are typically gathered through on site observations. However many aspects of pest biology and ecology require constant monitoring, occur during the night, or are rapid events that often escape the most vigilant efforts for monitoring. Modern cell phones, LEDs, and digital technology allow us to develop pest monitoring tools that are reliable and inexpensive, can operate remotely, and deliver data through cell phone networks. Our units, developed by Spectrum Labs in Phoenix, AZ and through collaborations with the University of Arizona and cooperators in Arizona, North Carolina, California, and Puerto Rico are allowing us to develop these monitoring devices for a wide range of pests over various environmental and turf settings. Our work completed in 2019-2020 further improved the capabilities of the LED light traps, developed a suction pheromone trap for moths, and finalized a mole cricket acoustic trap.

Three new prototypes were developed via site visits and consultations with Spectrum Labs in Phoenix, AZ. The original version of the LED light trap that was used successfully in Arizona, North Carolina, and Puerto Rico to monitor various night flight beetles such as masked chafer was modified to increase its field of effectiveness. The original version had a single bank of LED lights and one deflector that covered a 120 degree arc. The new version utilized two sets of LED lights and two deflectors that essentially doubles its potential arc for attracting and capturing masked chafer beetles. The overall arc for attraction was increased to 240 degrees. Evaluations indicate that the power usage is low enough with twice the LEDs that recharging the battery with a single small solar panel is adequate for full battery charge. Comparison of the new LED light traps versus the old fashioned traps indicate the new traps catch more beetles despite the limited arc for attraction as compared to the 360 degree of the old traps (data not shown). Light traps that were first built 3 years ago continue to operate every night without any maintenance. Reliability has proven to be outstanding.

The mole cricket acoustic caller has presented multiple technological challenges. Increasing the volume to make it loud enough to attract female crickets above all the background “noise” of the actual mole crickets resulted in increased power use and recharging the battery became an issue. Various amplifiers, speakers, speaker housings, and placement were all evaluated and a new approach has been developed for next year. The other issue of a large cone or funnel to collect the flying mole crickets that can withstand the strong winds at the coast is still in the design phase. The development of electronic components has been completed and the proof of concept that we can attract mole crickets with digitized recordings has been confirmed. The use of small children’s wading pools for a temporary “catch basin” is adequate for research purposes, but not for practical application. The four units under evaluation in Puerto Rico were reportedly destroyed in a storm in late 2019, but I believe they most likely fell victim to vandalism.

A third trap for capturing moths (fall armyworm, cutworm) has progressed, but while the design works well for use of a pheromone and diffuser, the ability to actually capture and record moths is more challenging. We have investigated three options. 1.) Provide a suction to pull the moths down into a chamber; 2.) Use a small fan to blow the moth down into a chamber; and 3.) Develop a small electric grid (similar to a bug “zapper”) that records a drop in the voltage each time a moth hits the grid (this is selective since only the species we are monitoring are attracted to the pheromone). The challenge is the power requirement for each approach and development continues on various options. These engineering issues have delayed the development of the pheromone traps, but it appears these issues can be addressed in the near future.

Development of optical counters and cell phone network delivery of data is now underway since the details of trap construction are now better defined. These counters and signal transmitters also require small amounts of battery power and the actual trapping design had to be completed before the next steps could become a reality. This development is currently underway.

We have linked with data from the National Phenology Network to better forecast and predict insect pest outbreaks and we are looking for correlations with weather patterns and traps catches. This information is posted on a weekly basis on the Facebook page ‘Turf, Bugs, and Rock n Roll’ and additional updates posted on the NC State University turf entomology blog NC Turf Bugs. The progress to provide weekly on line updates has been frustratingly slow, but the modest budget requests allow for an incremental development program that focuses on development one issue at a time. 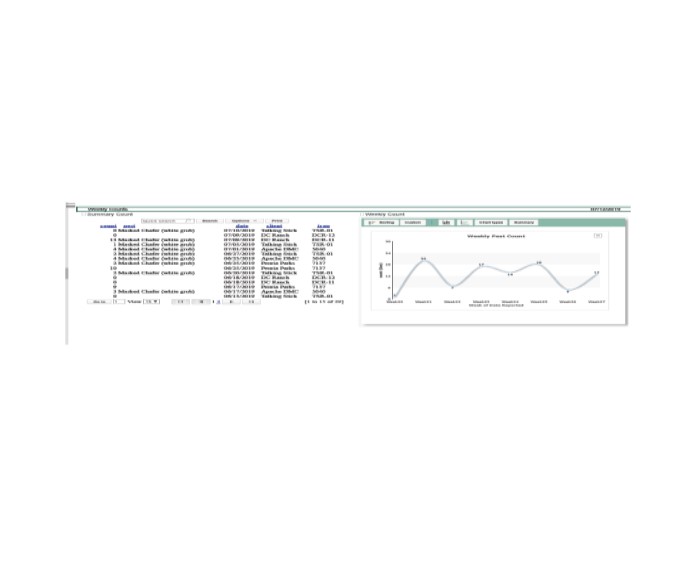