Effect of Waterlogged Soil on Preemergence Herbicides in Turfgrass Systems

Find this article at:
go.ncsu.edu/readext?777835
— Written By Travis Gannon

With the end of winter in sight, preemergence crabgrass and goosegrass control is at the forefront of many turf managers’ minds. Beyond the establishment of dense, healthy turfgrass, one of the most effective means of maintaining weed-free turfgrass is utilizing well-timed preemergence herbicide application(s). Applying a preemergence herbicide prior to crabgrass germination is critical to achieving maximum efficacy. Crabgrass germinates when 24-hour mean soil temperatures average about 54-55 degrees F for 3-4 consecutive days. In recent years, these target soil temperatures have occurred earlier than in previous years. For this reason, earlier preemergence herbicide applications have been recommended in the last several years. It’s also important to note that preemergence herbicides must receive rainfall or irrigation prior to germination and emergence to provide optimum efficacy (we all know this hasn’t been a limiting factor in recent weeks). 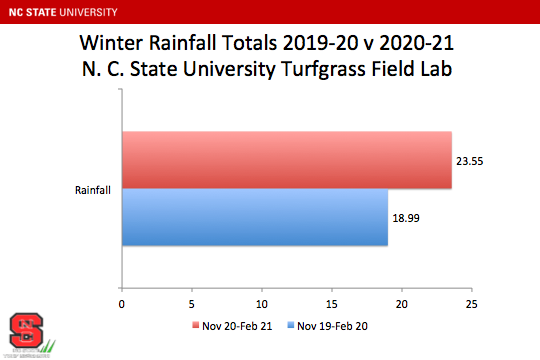 As a result, soils in many areas have been saturated much of the winter. What are the impacts of this on preemergence herbicides?

What happens when soils are saturated from a historic year of winter and early spring rainfall? It is important that turfgrass managers are cognizant that saturated soils may adversely affect the length of control provided by certain preemergence herbicides in anaerobic (flooded, waterlogged) conditions. As soils become waterlogged, oxygen is depleted, creating an anaerobic environment. These anoxic soils (depleted of dissolved oxygen) can facilitate accelerated anaerobic herbicide dissipation, leaving managers susceptible for weed breakthrough after preemergence herbicides may have prematurely degraded below effective concentrations. In the table below, we see how several preemergence herbicides are affected by saturated conditions (it should be noted values in table are relative and are influenced by many biological and environmental factors). 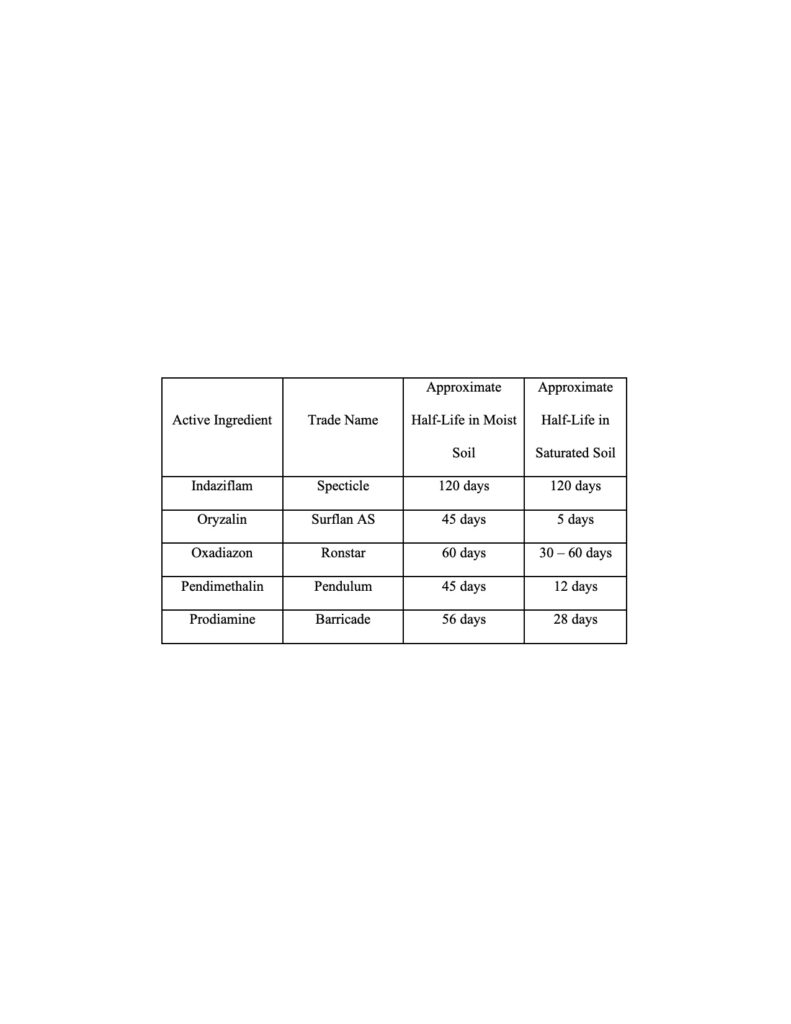 This should not be a deterrent from utilizing preemergence herbicides, but rather serve as a reminder to remain vigilant in scouting historically weedy, weak, and wet areas for newly emerging weeds following this wet winter (and presumably early spring) season. For those managers that utilize split preemergence herbicide applications, you should consider increasing the active ingredient rate for the sequential application if your area has received excessive rainfall and soils have been saturated for prolonged periods of time. How much to increase the rate is an educated guess and depends on site-specific conditions but increasing the rate by 25% on the second preemergence application is certainly reasonable. Furthermore, if a split application was not planned and the entire herbicide was applied at the initial application, consideration of applying another application may be warranted. Additionally, managers should be prepared to utilize postemergence herbicides if/when weed breakthrough occurs (it’s most likely not an issue of “if” but “when”…). As always, read and follow product label (the label is the law).