Find this article at:
go.ncsu.edu/readext?800624
— Written By Grady Miller

We often talk about the challenges to growing warm-season and cool-season grasses in the transition zone. In our landscapes, two commonly planted turfgrasses are tall fescue and zoysiagrass. Over time, it seems some months favor tall fescue (cool-season turfgrass) and in other months the conditions may favor zoysiagrass (warm-season turfgrass). Other turfgrasses can be substituted in this discussion. For instance, bermudagrass can be especially hardy during the warm months, but may still suffer the effects of the winters or cool springs.

I mention this now because we presently find ourselves in a tough situation for most of our turfgrasses. The latest NC Drought Update (May 25, 2021) has most of eastern NC at 4 or more inches below normal for the season. Raleigh has received just 4.9 inches of rain since March 1 – its driest spring-to-date on record. This is in sharp contrast to weather conditions from November 2020 – February 2021, where we Raleigh had between 5 and 7 inches each of those months. In fact, 3 months into the year we were having our wettest year on record in Raleigh.

The spring was very kind to tall fescue this year, but with this current heat and drought, tall fescue is going to suffer. I know a number of folks that are hoping tall fescue summer dormancy really works! 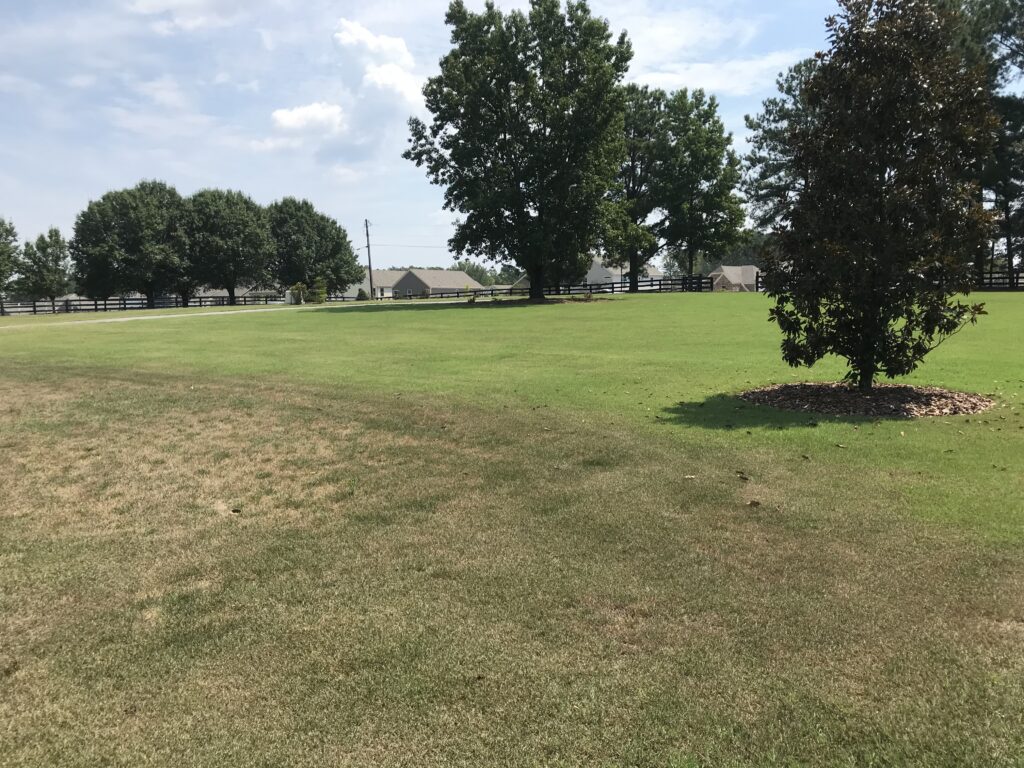 Drought stressed zoysiagrass in foreground and bermudagrass in background

Zoysiagrass came out of the winter under saturated conditions; conditions that usually cause lots of spring problems with disease and rooting. However, the woes of zoysiagrass does not end there. Zoysiagrasses did not start to green up until the end of April due to cooler than normal temperatures. During March and April we had extended windy conditions that rapidly dried out the soil surface. With low soil moisture in March, April, and May, weak-rooted zoysiagrasses have not performed very well (see inserted picture). Without irrigation during green up, zoysiagrass may have never fully filled-in from winter. And with the current hot and very dry conditions, and poor rooting, zoysiagrass may be really suffering in some lawns. Even if the rains come soon, it may take a while for the zoysiagrass to recover. Currently, bermudagrass is doing much better in areas where it is adapted (full sun).